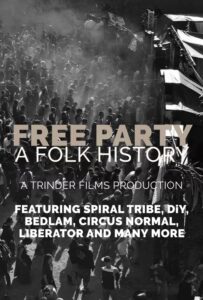 Free Party: A Folk History is major new, independently made, feature documentary following the birth of the free party movement in the late 80s and early 90s and the impact it’s had on our present times. The film follows the inception of the movement, a meeting between ravers and the new age travellers during Thatcher’s last days in power, and the explosive years that followed, leading up the infamous Castlemorton free festival in 1992 – the largest ever illegal rave, which provoked the drastic change of the laws of trespass

with the notorious introduction of the Criminal Justice Act in 1994.

Aaron Trinder says “This film is a unique look at a much underrepresented moment in cultural history, the last great unifying youth movement, before digital cameras and the internet, which really challenged the authorities, connected environmental awareness with music and questioned laws on land rights and trespass. Thematically its incredibly prescient to today, with new laws on trespass being proposed, illegal parties taking place post pandemic and 30 years since Castlemorton itself. I’ve got incredible access to unseenarchive and grass-roots stories very seldom heard from the people who lived it”.