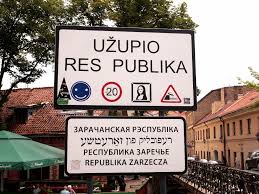 The story of Užupis is a bizarre, yet strangely encouraging tale of what can happen when a bunch of eccentrics are left to their own devices. When Lithuania broke free of the Soviet Union, Lenin’s statues were torn down, and a lot of plinths were left empty. At a time when the country was trying to rediscover its national identity and escape the shadow of communism, local photographer and civil servant Saulius Paukstys spotted an opportunity. ‘We were desperate to find a symbol that would mark the end of communism, but at the same time express that it wasn’t always doom and gloom,’ Paukstys told The Guardian. He chose Zappa’s work to accomplish this and began to collect signatures and, despite Zappa’s total irrelevance to Lithuania, people got behind the idea and gave a huge show of support to the bemused authorities. It may have been the absurdity of the proposition that struck a chord with the artistic community.